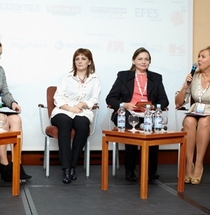 Considering the difficult socio-political and economic situation in the country, the organizers of the XII International PR-festival could not ignore the topic of corporate PR in turbulent business environment. In a panel discussion devoted to it participated: Director of Public Relations and Communications at SKM Natalia Yemchenko, Head of Public Relations of Smart-Holding Eugene Zagorulko, PR-director at the Corporation «ATB» Anna Leachman, Head of Business Development Department at KPMG Ukraine Alina Sevastyuk and PR-director at the bank «Russian Standard» Vera Tarasenko.

While opening the discussion, its moderator, vice-president of the Ukrainian PR-League Elena Derevianko stressed that, despite all the external problems «using the right approach and having created the crisis management security «pillow» by systematic PR-work,» the company may work as effectively as before the crisis.

Asking questions to each of the participants, she raised the most relevant aspects within the stated theme. Including how increased turbulence affects the priorities of PR-work, on what aspects should Heads of PR-departments focus their attention, how to communicate effectively with target audiences under the given circumstances, how the crisis is being faced by representatives of various business forms, etc.

As a result, during the discussion it was possible to discuss a number of issues that PR-professionals have to face not only in times of crisis, but every day. It was saying that the crisis – a litmus test that allows you to check the strength of both the business itself and all its structures as well, including the quality of PR-services, and gives an opportunity to develop and sharpen effective anti-crisis mechanisms. The fact that communication are in the foreground today, so with what results their company or outsourcing project will come out of the same «zone of turbulence» depends largely on the experience of PR-specialists. The general opinion on this aspect was expressed by Eugene Zagorulko: «The crisis – an opportunity for the PR-specialist to demonstrate himself. Value of communication professionals in the company repeatedly increases. However, the crisis – is not the reason to change the long-term communications strategy. The company should reduce the time responding to external challenges and make more intensive use of reputation management tools that give immediate effect.»

Extremely relevant topic, that is how effectively communicate with target audiences in turbulence, while maintaining political neutrality and without losing reputation, raised Natalia Yemchenko. «Now there is a huge bulk of information – true, false, deliberately misleading. And in relation to business as well. PR-manager inside the company knows what is really going on. Sometimes it coincides with the expectations, falls into good soil, and immediately sprouts. It is not difficult, the main thing here – the speed and brevity. Sometimes this knowledge goes against to what they want to hear. So much depends on the professionalism of PR-manager in this case. I believe that the sign of a high skillfulness, efficiency and readiness to the current situation – when you're able not just to convey unwanted, contrary to mainstream content, but forcing your audience may not agree, but understand and accept it,» – she emphasized. Speaking about the signs of the times, Yemchenko noted that in society today a request for security is topical again – personal, economic, and ideological. That is why in such a period communication should be fast and at the same time balanced. Also, new priorities and increased sense of social justice as a result of any revolution require from businesses to re-affirm its social legitimacy, its contribution to society, without going beyond its «territory»: «Business, no doubt, can and should act and speak with regard to the new agenda. The most important rule – to be out of politics.»

Alina Sevastyuk in her speech highlighted the trends relevant to the industry, not solely in times of crisis, but in the long-term: «PR today – it's a demanding job, in spite to the old and dangerous stereotypes within organizations on what its main goal is. Firstly, the increased influence of the individual on an organization's reputation due to the high speed of information dissemination. Secondly, the increasing role has multimedia and combination of forms of communication. Finally, more than ever internal communication is important, besides there is a blurring of borders considering where internal communication ends and outside one begins.»

Response from the participants and the audience has had the theme on protection of business reputation, raised by Anna Leachman, which accentuated the fact that in Ukraine is almost impossible to defend reputation within the legal field. «Today, according to my calculation the number of fake attacks on any business has intensified by 200 times. We see this by our own example. Seemingly, responding to fake attack – the direct task of PR-manager. What can PR do in this situation in the legal field, eliminating communication function, which has already beenmentioned? In fact, nothing. Even if you really want. If we are talking about some negative in the traditional media, there is a small, but still a chance to prove your innocence. If it comes to the Internet, etc. chances to defend your reputation as low,» – she said. In turn Vera Tarasenko said that much in this case depends on the work PR-departments: «… in the protection of the reputation the important role is played by the quality of PR-department. It is of great importance for PR-managers to make their work with the media balanced, and, preferably, share their experiences instead of confronting to each other.» Anna Leachman also appealed to the professional community with a proposal to jointly develop effective mechanisms for the protection of business reputation.

Almost all the speakers mentioned the importance of the relationship of structural departments and top management within the company to achieve maximum effect. And that at the same time it is very important to feel a personal responsibility, not be afraid to make decisions and act in time. Alina Sevastyuk: «It is important to find a way how knowledge, energy, people, and their talents in these difficult times can be applied for the good, and also to upgrade strategy. Time to be warriors, and most importantly – to understand when you have to fight and when not to dust tip of your boots.»

As a result, as effective anti-crisis corporate PR tools, among others, were named permanent monitoring of risks and their immediate relief, immediate rebuttal of false information, the activation of all the contacts and relationships, openness and constant communication, weighed decisions, checked content. Accordingly, actions that in the current situation and work against PR-specialist, and business in general, and which should be avoided – is the lack of communication including stakeholders, full stop of projects, panic sentiments.