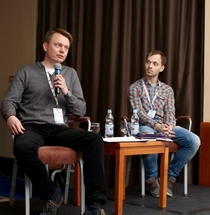 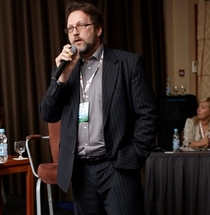 In the XXI century there is more and more information but less time to perceive it. Traditional media and internet solves this problem by replacing the usual text format with graphic language of objects and symbols.

As part of the International PR-Festival 2014 a panel discussion «Visual communication in the world where people unwilling to read» dedicated to modern methods of information transfer was held. The participants were the head of the information services «Korrespondent» magazine Andrey Gazin, project manager at Newslog.org Andrey Zagorodsky and designer infografer of «Vesti» Yuri Kurilchuk. Moderated the conversation chairman of the Union of Designers of Ukraine Sergey Chuev.

Opening the discussion, Sergey Chuev briefly touched upon the history of graphic symbols and their use in different time frames of human development, led a scientific basis for the growing popularity of visual communication, built on appealing to emotions. And gave examples of the most traditional use of graphics in various spheres of life – from the visual navigation system or rescue team to design.

Following the moderator in a conversation including participants thematic panel. The first speaker was Andrey Zagorodsky, who focused on the use of visualization in the press services. He stressed that Ukraine is at an early stage of development in term of infographic, however, the process is quite active. And as a practical example described the experience of working with information in the newly created Ukrainian crisis media center. According to Zagorodsky, use of infographic not only allows his team to effectively organize the information, but also attracts the attention of more consumers to this information. He also mentioned that the use of visualizations in media relations – it's not just a tribute to fashion, but an urgent necessity. «There are enough well-known research that shows how increases distributing of your content, if you are using multimedia. If your press release will be provided with not just text, but images as well, additional links, infographics, backgrounds, its circulation will grow by 10 times. British source Social Lable says that 45% of users click on the link to infographics, and 30% do so, even if they are not interested infographics. Twitter research shows that the number of responses for a message that contains infographic increased fourfold. In fact, multi-screen has created for press secretaries, press services a new reality. We have to produce a product for those who watches more and do not read, and try to make what will be more convenient for them to perceive» – summedup Andrew Zagorodsky.

Yuri Kurilchuk in his speech lifted the veil of mystery over the work of designer – infografer of print media. «If we talk about creating visualizations for the newspaper, they first of all determined by the fact that person is getting pretty boring while flipping one continuous text. I can’t say that infographic analyze massive amounts of data. But taking into account that the newspaper will be viewed, for example, while traveling in the metro, it should not contain such amounts of information, it should be rather illustrative. In our work we try to use a different style: the reader must constantly be surprised» – he shared. Among other things Yuri Kurilchuk told about the history of some graphical objects that have become an integral part of the newspaper content, and about the peculiarities of infografer’s work on various projects.

Unlike his colleagues, paying more attention to a case study, Andrey Gazin prefer to focus on the use of infographics. He reminded the audience about the origins of modern infographics. Namely, for the establishment in the early twentieth century in Austria of a universal visual language consisting of thousands of graphic symbols – isotype – designed to deliver information to the illiterate population. Basics of the language were used later for the same reason in the USSR. «Today, all are able to read, but not everyone wants to or not everyone has the time – said Gazin. – Infographics in this sense is extremely important because it allows the reader to manage their time.And if a person perceives the text step by step, the image – as a whole and immediately.» Talking about the peculiarities of visualizing objects, Andrey Gazin cited the example of NY Times newspaper, whose designers while creating infographic are guided by two popular cartoon characters from The Simpsons family, and divided them into two main groups of information consumers – Bart (simple model is available) and Lisa (infographics with «subtext», forcing to reflect and analyze).

Speaking of infographics in Ukraine, Gazin said that in this case the domestic media are far from ideal, because they do not always take into account the main criteria that it must meet. That is to be structured, visually hierarchical, not to distort the data to avoid the predominance of form over content, give the possibility to compare, etc. According to experts, the media often use infographics «inappropriately»: «Infographics should be relevant and justifiable. Often it is used as an illustration or simply trying to make it as more intense, which prevents the correct perception.»

Summed up the discussion an answer to moderator’s question on how «to identify» good infographic: «There is asimple test: close the text part with hand. If the signs do not carry any meaning, it is just a set of pictures, unrelated to each other».