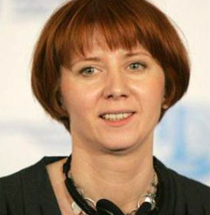 Journalist. Press secretary of the President of Ukraine

In 2000 she graduated from the Ivan Franko Lviv National University, faculty of journalism. In 2006 she got the diploma of University of Economics and Law KROK (specialty – the head of projects and programs in the sphere of material (intangible) production). From august to december 2000 – editor of Korrespondent.net web portal. From january 2001 to august 2002 – editor of Korrespondent magazine. From august 2002 to january 2000 – editor, editor of the day, chief editor of TV Channel 5. From february 2006 to august 2008 – new projects producer on Channel 5. From september 2008 to march 2011 – editor in chief at Savik Shuster Studio (TV project of journalist Savik Shuster). From december 2010 to march 2011 – director of the creative and industrial center on Channel 5. From March 2011 – press secretary of the President of Ukraine Viktor Yanukovych.