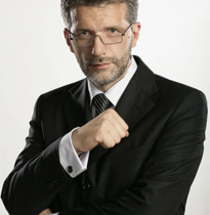 He is an expert in international relations; Interpreter assistant of the English language (graduated from the Faculty of International Relations and International Law of the National Taras Shevchenko University of Kiev).

After graduation from the University, in 5 years he managed to work his way up from a correspondent to deputy editor-in-chief of News from Ukraine newspaper. Afterwards worked 5 years in London as a producer of the BBC Ukrainian Service. In 1996 he became an acting editor-in-chief and then a deputy editor-in-chief of the Internews International Media Center. Same year he started to cooperate with «1+1 Studio» TV channel as an issuing-editor, and then as a deputy editor-in-chief of the Television News Service (till 1998). Next year worked as an editor-in-chief of the Noviy TV Channel. The beginning of a new millennium brought new professional opportunities for Andrey Kulikov: he tried his hand at producing and hosting TV program «Night Dramaturgy» on STB TV Channel). From 2000 to 2007 he worked as a Ukrainian Service producer of BBC, and a media expert for the European Union TACIS project – BBC World Service Trust, JORNA (a Journalis’s Education – the Development of Skills). Nowadays he is a host of a popular TV program «Svoboda Slova» («The Freedom of Speech») on ICTV TV Channel. Together with his career of a professional journalist, Andrey has been working as a professional translator for many years.