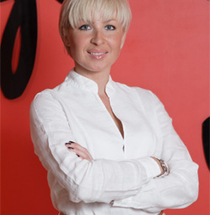 She graduated from the faculty of philology of Kyiv National Linguistic University (department of foreign Languages, specialty – teacher of english language and literature). In public communications since 2005. From 2005 to 2006 she worked in a marketing agency «Sparkmarketing» on a position of manager to work with the media. In SPN Ogilvy team since 2006. Initially she worked as a client manager. One year later she was appointed a director of customer service, then the head of the practice of Consumer Marketing. In early 2010 she became a Deputy director of SPN Ogilvy’s Kiev office. During the years of work at the agency she has acquired considerable experience in managing projects of various scale and complexity, studied the principles of the Ogilvy PR network and became a mentor to many members of corporate team. From August 2010 she has been headed the Kiev office of SPN Ogilvy.