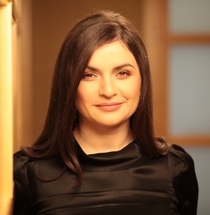 In 1998 Natalia Yemchenko graduated from Donetsk National University majoring in «Finance and Credit». After obtaining a master's degree Yemchenko worked for three years in the investment company «Kolo» at a position of the financial manager. In 2001 as CEO she led investment company «Keramet Invest». In 2003 Natalia Yemchenko began working in SCM – first as manager of the trade group, and then – as the manager of public relations. Since December, 2006 Natalya holds a position of the Director of Public Relations and Communications. Her responsibilities include building relationships with target audiences, including the media, employees of enterprises, their local communities, government, public organizations, the general public, and also creation of reputation and formation of positive public opinion about the Company. Natalia Yemchenko also is the Head of the Audit Commission and the Head of the editorial board of the TV channel «Ukraine».