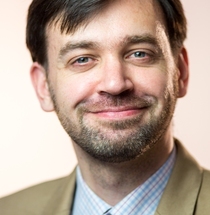 Board member of Ukrainian Fulbright society, co-founder and director of the «Digital Media in universities» (DMU) – teacher training programs of leading Ukrainian universities on social media, online journalism and convergence, a member of the Ukrainian National Commission on journalistic ethics. Since 2007 – co-founder and director of the program «DFJ – Digital Future of Journalism» – postgraduate program for journalists in the field of new media, online journalism and convergence. In 2010 was a member of the National Communication Association, USA. In 2006-2007 was the co-director of the project cooperation between Mohyla School of Journalism at Ohio University (U.S.), sponsored by the U.S. State Department. He taught at Ohio State University (USA), School of Telecommunications (TCOM), was a member of the Broadcast Education Association, USA, co-organizer and teacher of the Summer School «Documentary film» (co-Mohyla Academy School and Ohio University). In 2006 he was a member of the Supervisory Board of the Summer School HESP «Media Literacy for the university faculty from Eastern and Central Europe and former Soviet Union» (Open Society Institute). As a journalist, he worked as a correspondent in Eastern Economist Weekly, editor and head of the international department of the program «Windows» on TV STB, producer and presenter of the program «Windows to the world», wrote a column about international relations in the newspaper «Business Week».