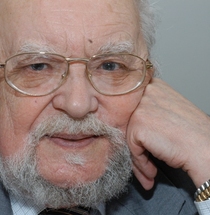 Modern Ukrainian philosopher, Doctor of Philosophy, professor, academician of of the National Academy of Sciences of Ukraine

In 1956 Miroslav Popovic arrives in postgraduate study of Institute of philosophy of AN of Ukraine and since then all life remains his worker. Here it defends the master's dissertation «An irrationalism in modern French philosophy» (1960) and the doctoral dissertation «Philosophical analysis of language of science» (1966). Since 1969 Miroslav Vladimirovich – the head of department of logic and science methodology, and since 2001 – the director of Institute of philosophy of G. S. of a frying pan of NAS of Ukraine. Editor-in-chief of the scientific magazine «Philosophical Thought». In 1992 Miroslav Popovic is elected a corresponding member, in 2003 – the academician of NAS of Ukraine. Is awarded by the Gold medal of a name of V.I.Vernadsky NAS of Ukraine (2007). On October 15, 2009 was awarded the title «The honourable doctor of the Kiev national university of a name of Taras Shevchenko».