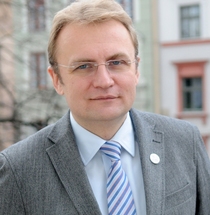 Public and political figure in Ukraine, mayor of Lviv

Worked as the deputy director of the Lviv branch of the Fund of social adaptation of young people under the Cabinet of Ministers of Ukraine, Chairman of the Board of JSC «Yugozapadelektrosetstroy» and the Supervisory Board of Cultural and Educational Foundation named after Metropolitan Andrey Sheptytsky UGCC, director of the «Institute of the City», the Chairman of the Board of JSC «TV channel «Lux». Since 2005 – the leader of Lviv public association «Samopomich». In March 2006 was elected mayor of Lviv, in 2010 the second time elected head of Lviv.