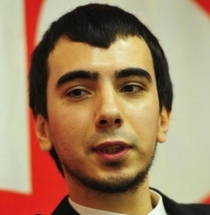 The most famous and quoted by the media pranker Russia and Ukraine. 27 years old, lives in Moscow, a lawyer and journalist. Started its activities in 2007. During this time he managed to play, bring revelation and show the true face of dozens of celebrities from the world of show business, sports and politics. Vladimir received wide popularity by making a drawing with the chairman of the Central Election Commission Vladimir Churov.After the elections to the State Duma in December 2011 pranker (from the face then still the Assistant to the President of the Russian Federation Arkady Dvorkovich) declared to Churov that Dmitry Medvedev dismisses that in connection with numerous meetings in Moscow.