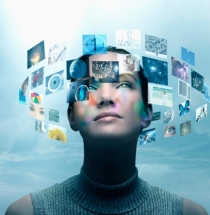 AR & VR Technologies of Tomorrow at the Service of Today

A considerable part of the XVI International PR-Festival agenda will this or that way be dedicated to technologies which were considered purely as the groundwork for “the future” not so long ago. Yet, our experts are ready to prove that the future is here to stay.

Olena Derevyanko, head of the XVI International PR-Festival’s Organizing Committee, “We are living in such interesting times that the future is getting less and less predictable. But we can see the sprouts of future tendencies even today. This is what we are going to discuss at the Festival.”

Virtual and augmented reality programs are successfully applied today, not necessarily in videogames. They are gradually winning over such spheres as filmmaking, TV (live programs), sales, designing, real estate, defense industry, healthcare (mainly surgery, psychology and psychiatry), and education by widening the scope of existing and creating brand-new markets. Yet, the development of these two technologies is not even due to their characteristic features. Virtual reality that produces an effect of total immersion into the modelled world is in a more advantageous position than augmented reality which consists in somewhat slight changing of the existing world. The situation is mainly boosted by a great demand for virtual reality dictated by the major consumer of VR – the videogames market. According to Goldman Sachs, VR technologies will be used by over 79 mln. gamers by 2020 and their amount will increase by 216 mln. by 2025.

During the forthcoming Festival we are going to assemble the puzzle of the efficient application of VR and AR technologies in various spheres of communications. Our speakers – Gleb Baibayev, Olena Derevyanko, Vlad Kotov, Daria Fedko – and their reports will help us to:

“Today, virtual reality is a possibility to live through history but not to take a course in it. The content may be virtual but your emotions, feelings and memories will be absolutely real. Thus storytelling becomes storyliving. Augmented reality is a way to say more by amplifying physical reality with digital information which is more exact, more fascinating and, ultimately, more visual by definition.AI technology implemented in chat bots is a way of making business communication convenient and useful to the uttermost by extracting the human element out of it. This is a way of guessing in advance what questions your clients might ask by accumulating all the possible information about them.”

We would like to remind you that the XVI International PR-Festival “Communications of Tomorrow: A Puzzle of Success” is to be held in the Grand Hall of the capital’s Khreshchatyk Hotel on March 29, 2018. The forum is traditionally initiated by the Ukrainian PR-League. The official organizing partner is the PR-Service Agency.