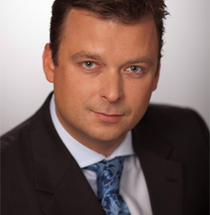 Graduated from the Institute of International Relations, Taras Shevchenko Kyiv National University. Master of International Information. Majors in information and analytical support of state foreign policy. In 2011 graduated from the Postgraduate Studies Department, Institute of International Relations, Taras Shevchenko Kyiv National University, and obtained the Diploma of International Economist. In 1998 began his work with "Inter" TV channel – first as an Editor of the International Section, Information and Analytics Service, and then – as the Principal Commentator of News Release Section, Information and Analytics Service, Ukrainian Independent TV-Corporation («Inter»). In 2005 was appointed as the First Deputy Editor-in-Chief of Information and Analytics Service, «Inter». Worked as the presenter of several television programs («Novosti» (News), «Podrobnosti» (Details), «Рodrobnosti Nedeli» (Details of the Week), «Deistvuuschiye Litsa» (Characters) from 2000 to 2007. Along with this, was a special correspondent at a TV channel in the United States from 2001 to 2007. Mr. Alexander Kolodiy is an author of interviews with a number of famous political figures from Ukraine and abroad. In 2007 he became the Chief Producer of TV and Radio Company «Кyiv». In parallel, as an author and presenter took part in such TV channel projects as «Podrobnosti іs Pervyh Ust s Alexandrom Kolodiуem» (Details First Hand with Alexander Kolodii) and «Vremya Mera» (Time with the Mayor). In 2009 held a position of the Producer General at the International «Slavonic Channel». In 2010 he became the spokesman of the Ministry of Fuel and Energy of Ukraine. Now he is heading the Information and Communications, the Ministry of Energy and Coal Industry of Ukraine.